The Dragon Ball Super anime may still be on hiatus, but there is a battle brewing for fans of the series thanks to a new edition of Monopoly from The Op / USAopoly. In Monopoly: Dragon Ball Super Universe Survival edition (Amazon) you'll buy, sell, and trade fighters like Goku, Jiren, Gohan, Piccolo, Frost, and Vegeta in an effort to become the richest and most powerful fighter. This version of Monopoly also has 8 sculpted tokens instead of the standard six (Universe Symbols 2, 3, 4, 6, 7, 9, 10, and 11). 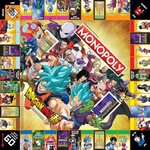 It was available on Amazon but it appears to be sold out?

I was half hoping that the "Got To Jail" would be "Go To Hell" since there is a legit hell in the universe. Oh well. LOL